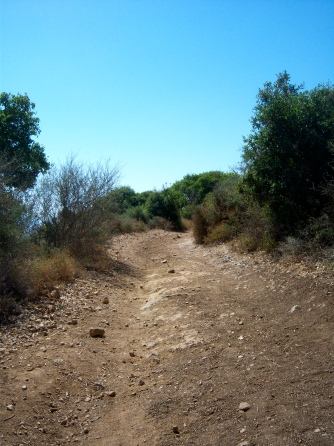 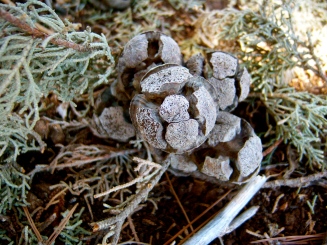 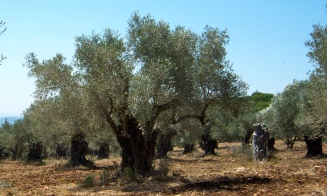 An olive grove on the way up Mt. Carmel

The Discalced Carmelite monastery on top of Mt. Carmel 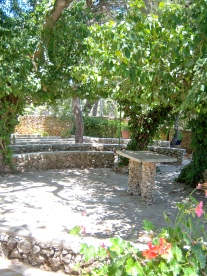 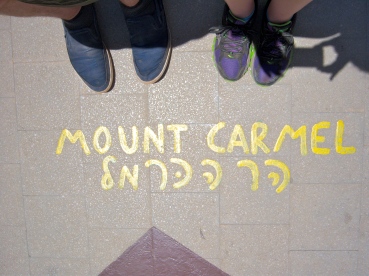 The prayer chapel in the Carmelite monastery 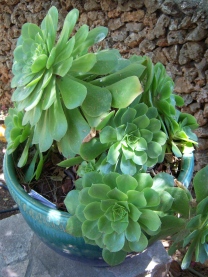 This morning, after waking up and eating breakfast, we began our trip with a 2-hour hike up Mt. Carmel. The path was easy most of the way (apart from a short rock scramble at the end), but we stopped for several rests, and we weren’t used to the temperature or sun yet.

On one of our stops, we remembered together the perhaps most significant story that took place here, the contest between Elijah and the prophets of Baal. This is a familiar story to many of us, but we were reminded on our hike up that Elijah hiked up this mountain (in sandals, not special shoes), and instructed all of Israel in the terms of the showdown, and goaded the prophets of Baal, and built a large altar, and dug a wide trench, and arranged the wood on the altar, and butchered a bull (not an easy task), and oversaw servants pouring 12 jars of water (in the middle of a drought!) over the offering, and offered a prayer for the Lord to reveal himself in fire.

And if that wasn’t enough, he also had seized all the prophets of Baal (450 of them!), and brought them down the mountain again (another 2 hours!), and executed them all there!

And if all that wasn’t enough, Elijah then climbed back up the mountain (2 HOURS!) and prayed again for the Lord to reveal himself in rain, and then raced down the mountain, ahead of King Ahab’s chariot, all the way to the valley below. In the following chapter, we read that after all of this, Elijah runs south to the wilderness, and goes a day’s journey into the wilderness.

What!? We were tired just hiking up! What kind of a man must Elijah have been? We all agreed he would have to be a strong man, of endurance and energy. We were reminded of how difficult it can be for us, like Elijah, to speak truth and act on it, especially in places where truth is not popular.

But reading the story again, we come to verse 46: “But the hand of the Lord was on Elijah.” In all of Elijah’s work, and in all of his (sometime strange) miracles, God’s hand and care surrounded Elijah, so much so that all of these miracles were done to God’s glory.

Standing in front of the monastery of the Discalced Carmelites on top of Mt. Carmel, I can’t help but wonder what sort of God is glorified in the death of 450 men. The monks who first came to this site as hermits were largely lay men and women fleeing Jerusalem, seeking to escape the violence of the Crusades and live a life of prayer and peace. And yet, in this place, we remember one of the dramatic and violent acts in Scripture. And we have many more of such places and stories to see and hear in the coming days. Religious conflict quickly arises as one of the central (if sometimes hidden) themes for this study tour.
Lord, guide us into further understanding and faith as we encounter such stories (historical and contemporary) of violence and conflict in your name; open our hearts to listen to the people who tell these stories, and to love your Word.

Herod’s Aqueduct was only one of his great building and engineering projects.

And, of course, felafel for lunch! 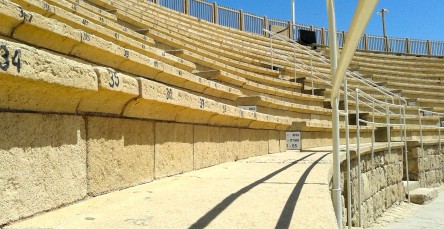 Caesarea Maritima was a city built largely as a holiday spot for the Roman officials sent to Israel. Its oppulence and grandeur was meant to win Roman favor and commerce. The theater here, then, is thought to have been built in the Roman style, with a massive backdrop constructed over the stage, rather than in the Greek style, which would have left the back open to the view of the Mediterranean Sea behind.

Caesarea Maritima includes a labyrinth of marble and tile mosaic baths like this.

Herod’s Promontory Palace, built on the Mediterranean, overlooked the Hippodrome, the expansive marble and tile mosaic baths, and the man-made harbor at Caesarea Maritima. All of this would have been done to win the favor of Rome.

It is thought that this palace is where Paul the Apostle would have stood before Agrippa, and then the Roman governor, and defended his faith. 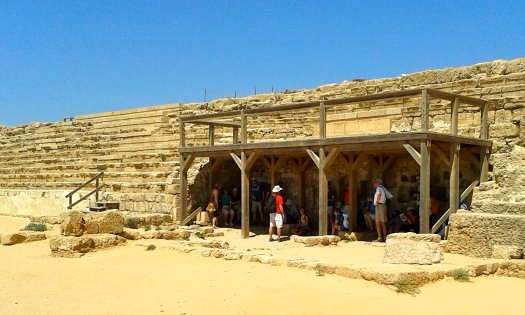 We sit for a lesson under the shade, overlooking the Hippodrome (horse track).

Herod the Great (74 BC – 4 AD) is one of the most significant figures we learned about, not because he’s featured in many New Testament stories, but because he shaped the 1st-century Israel we read about in our New Testament. Herod was not Jewish, but Idumean (a descendant of the Edomites, traced by to Esau, Jacob’s older twin brother). He was also a vassal of Rome, and therefore doubly detested by 1st-century Jews. Ironically enough, he is celebrated by contemporary Israel as one of their greatest historical kings, and his great building projects are being excavated and preserved for historical research and tourism.

Herod is now famous for his great building projects. We visit two here: a standing remnant of his great aqueduct, and the remains of Caesarea Maritima. Herod built such monuments for three reasons: to bolster his own ego, to placate and please Rome, and to win over the Jewish people. Caesarea Maritima, named after the new Caesar, was built to win Rome’s favor. In a failed political move, Herod had sided with Marc Antony in the war against Julius Caesar’s nephew Octavian. In the aftermath of Antony’s defeat, Herod had to prove his renewed loyalty to emperor Octavian, now named Caesar Augustus. Caesarea Maritima, with its opulent theater, marble and tile mosaic baths, and expansive Hippodrome, was built as a cultural haven and resort for Roman officials stuck in the backwater region of Judea. Of course, Herod also built himself a luxurious palace here, with a grand bath and scenic view of the Mediterranean.

It makes sense, then, when we read in Acts 10, that there was a Gentile named Cornelius living in Caesarea. This story marks a great transition in the Biblical story of God’s people, because it’s here in Caesarea that some of the first Gentiles profess their faith, are baptized, and receive the Holy Spirit. Peter, the disciple of Jesus, is witness to God’s grace being offered to Gentiles as well as Jews. All of us — who should be outside the family of God by blood — are able to come freely into the household of Grace, and are now named insiders. We were reminded together that because we who were outside have now been brought inside, we should always remember those still outside, and treat them with the same hospitality and grace that has been offered so lavishly and freely to us.

We also remember here at Caesarea that even our great hospitality to the outsiders may get us in trouble. Paul the Apostle, at the end of the book of Acts, is arrested by the Jews, and asks to be brought here, that he may defend his faith before Roman officials. In this palace Paul would have stood in chains for the gospel, and appealed — first to the governor Felix, and then to his successor Festus, and eventually to King Agrippa — to be brought before Caesar himself, that the message of God’s great hospitality to the outsider, the Gentile, may go to the very heart of the Roman empire, and spread forth from there.
I am deeply impressed here, standing where Paul stood. As I reflect on the purpose for which I went to seminary, to preach the gospel, I wonder to what end my preaching will take me, and to whom I will be asked to defend my faith.
Lord, thank you for your calling on my life to preach the gospel, and defend my faith. Equip me with the words and the courage to go wherever you send me.